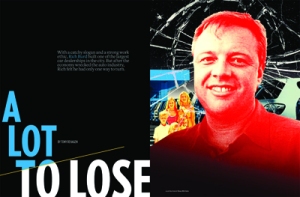 Here comes Rich Burd, emerging from the rows of gleamingautomobiles, extending his hand in your direction as if he’s been expecting you. You’ve seen him before, in his cheesy TV commercials—“Haven’t you heard? Burd’s the word!”—and here he is in the flesh. He’s a bit shorter than you expected, but there’s that same round face with heavy eyelids, the same blond buzz-cut standing motionless in the breeze, the same knowing smile. He wants to welcome you to his kingdom of freshly washed and waxed coupes and sedans, half-tons, full-tons, SUVs and hybrids, if that’s your thing, each adorned with a bright-colored balloon and priced to sell. He grips your hand firmly, looks you in the eye, and asks if he can show you something, as if he already knows exactly what you want, what you need, and what you can afford.

Rich is a salesman, after all, a pro, a closer who built the shimmering white 55,000-square-foot Burd Ford showroom and service center looming behind him brick by brick, sale by sale, starting at age 19. And he is more than owner and namesake. He is the father of this place, this supermarket of cars, and its salespeople and mechanics are as much a part of him as his wife and kids. Everything—from the classic rock on the sound system punctuated by thunderous, distorted pages to the lightbulbs behind the blue B-U-R-D sign—runs on his unbridled horsepower. Shake that hand, take those keys, and drive off in a Burd Ford, and you’ll become part of that extended family for life.

So what can he put you in? Need towing power and hauling capacity? There are some F-150s hot off the line. Packing the family around? How about a roomy Expedition, like the one Rich’s wife drives? Concerned about the price of gas? Friend, who isn’t? It’s 2009, and pretty much everyone is hurting. Rich knows you’ve been up late at the kitchen table, bracing for the worst. He understands that at the top of every household’s list of resolutions is squeezing a few thousand more miles out of the family car.

But what you may not realize is that Rich has been up nights, too. He has spent hours in his office, sweating beneath mounting piles of red numbers. The office window is one-way tinted glass. Rich can look out on his fleet of unsold cars, but you can’t see in. You don’t know that Rich once sold more than 130 cars a month from this lot. Or that there have been months this year when he has moved fewer than 80. That in order to build this state-of-the-art facility, Rich Burd gambled big, $8 million–big, just before the crash, when the car business bottomed out. You don’t know that he is still waiting for his $300,000 Cash For Clunkers check. You can’t see the framed photos on the shelf above his desk, a wife and four children looking down, counting on him to pull the family through.

Even they can’t see how bad it has gotten. His best friend, Chris, his spouse of 22 years, can’t guess the weight of the burden Rich has lately felt bearing down upon him when he shuts that office door. No one sees what this economy is really doing to Rich Burd. No one knows it will kill him.

Rich Burd was born a car man. His father, Gill Burd, was an auto wholesaler who moved his business here from Kentucky when Rich was 11. At local auctions, Rich observed his father’s skill at sniffing out a deal, watched him bid on clunkers to be hauled back to the family shop and refurbished and sold to dealers for a tidy profit. The elder Burd imparted his knowledge to his son, but he was a stern boss. “His dad was a pretty hard guy no matter who you were,” says Jon Parson, a childhood friend of Rich’s who also worked for Gill. In his early years, Rich toiled in the shop, detailing cars. When he was old enough, he ran rehabbed Oldsmobiles, Fords, and Cadillacs on the highways and back roads between auctions and dealerships all over Indiana.

Read the rest at Indianapolis Monthly