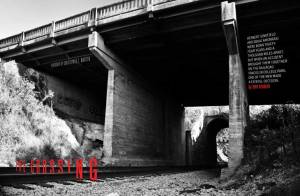 The train that killed DeKai Amonrasi no longer exists. CSX Q612 out of New Orleans met its end at Tilford Rail Yard near Marietta Boulevard, a few miles west of Berkeley Heights on Atlanta’s west side. There its 120 cars—hauling refrigerators, automobiles, and sheet metal—were decoupled and classified by destination, 9,000 tons of metal and merchandise broken up and blended with that from dozens of other incoming rail cars. These new trains were bound for hubs like Charlotte, Chicago, and New York, where their payloads were delivered, the empty boxcars and hoppers eventually joining a new line. As you read this, the pieces of deceased donor Q612 are vital organs in dozens of trains across the continent.

Locomotive 9043, the blue-and-yellow, diesel-powered leader of Q612, re-fueled and moved on as well. Pulling its newest charge, 9043 is barely distinguishable from its fellow engines running along the 140,000 miles of rail sewn through U.S. cities and towns and the vast countryside that lies between them. Its shrill horn blasts through every crossing, briefly alerting the world to its presence and warning anything that might stand in its way.

Freight trains don’t run on tight schedules. The speeds of diesel locomotives like 9043 vary between 10 and 50 miles per hour, depending on track conditions and load weight. It is almost impossible to know exactly when the train is coming—at least in time to do anything about it. In Georgia, where there are more than 4,800 miles of active track, the sight of a train is commonplace. People busy on their own courses hardly take note. But the train is always coming. In ice, snow, wind, or rain. And by the time you hear the horn, it’s too late.

Herbert Sinkfield slides gingerly off the bed and into his slippers in the back bedroom of his house. The wooden cane he reaches for could be expected for an eighty-two-year-old retired bricklayer, especially one with bone cancer in his hip. But Herbert never needed it before the accident.

Read the rest at atlantamagazine.com